“Homebrew and How the Apple Came to Be” 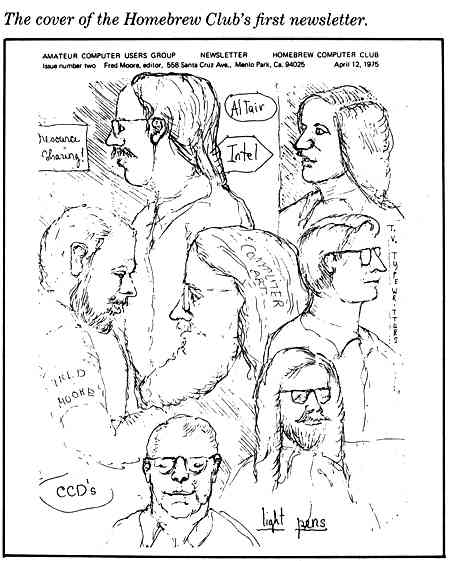 The cover of the club's first newsletter

Today in 1975, the Homebrew Computer Club met for the first time. Wikipedia: “Several very high-profile hackers and IT entrepreneurs emerged from its ranks, including the founders of Apple Inc. The short-lived newsletter they published was instrumental in creating the technological culture of Silicon Valley…  It was started by Gordon French and Fred Moore who met at the Community Computer Center in Menlo Park. They both were interested in maintaining a regular, open forum for people to get together to work on making computers more accessible to everyone.”

Steve Wozniak: “The Apple I and II were designed strictly on a hobby, for-fun basis, not to be a product for a company. They were meant to bring down to the club and put on the table during the random access period and demonstrate: Look at this, it uses very few chips. It’s got a video screen. You can type stuff on it. Personal computer keyboards and video screens were not well established then. There was a lot of showing off to other members of the club. Schematics of the Apple I were passed around freely, and I’d even go over to people’s houses and help them build their own.

The Apple I and Apple II computers were shown off every two weeks at the club meeting. “Here’s the latest little feature,” we’d say. We’d get some positive feedback going and turn people on. It’s very motivating for a creator to be able to show what’s being created as it goes on. It’s unusual for one of the most successful products of all time, like the Apple II, to be demonstrated throughout its development.

Today it’s pretty obvious that if you’re going to build a billion-dollar product, you have to keep it secret while it’s in development because a million people will try to steal it. If we’d been intent on starting a company and selling our product, we’d probably have sat down and said, ‘Well, we have to choose the right microprocessor, the right number of characters on the screen,’ etc. All these decisions were being made by other companies, and our computer would have wound up being like theirs-a big square box with switches and lights, no video terminal built in… We had to be more pragmatic.”

I launched the Big Data conversation; writing, research, marketing services; http://whatsthebigdata.com/ & https://infostory.com/
View all posts by GilPress →
This entry was posted in Apple, Computer history, PCs, This day in information. Bookmark the permalink.