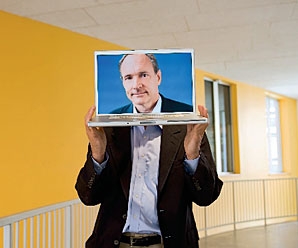 Today in 1991, Tim Berners-Lee posted files to alt.hypertext, making the WorldWideWeb available to the Internet community. Berners-Lee message said, in part: “The WorldWideWeb (WWW) project aims to allow links to be made to any information anywhere… The WWW project was started to allow high energy physicists to share data, news, and documentation. We are very interested in spreading the web to other areas, and having gateway servers for other data. Collaborators welcome!”

In Weaving the Web, Berners-Lee wrote: “Putting the Web out on alt.hypertext was a watershed event. It exposed the Web to a very critical academic community… From then on, interested people on the Internet provided the feedback, stimulation, ideas, source-code contributions, and moral support that would have been hard to find locally. The people of the Internet built the Web, in true grassroots fashion.”

Four years later, in 1995, many were still skeptical of the Web’s potential, as this anecdote from Dr. Hellmuth Broda (in Pondering Technology) demonstrates: “I predicted at the Basler Mediengruppe Conference in Interlaken (50 Swiss newspapers and magazines) that classified ads will migrate to the web and that advertisement posters will soon carry URL’s. The audience of about 100 journalists burst into a roaring laughter. The speaker after me then reassured the audience that this ‘internet thing’ is a tech freak hype which will disappear as fast as we saw it coming. Never–he remarked–people will go to the internet to search for classified ads and he also told that never print media will carry these ugly URL’s. Anyway the total readership of the Web in Switzerland at that time, as he mentioned, was less than that of the ‘Thuner Tagblatt,’ the local newspaper of the neighboring town. It is interesting to note though that in 1998 (if my memory is correct) the same gentleman officially launched the first Swiss website for online advertisement and online classified ads (today SwissClick AG).”

Yesterday (August 5, 2013), The Washington Post Co. agreed to sell its flagship newspaper to Amazon.com founder and chief executive Jeff Bezos for $250 million in cash. The Wall Street Journal reported that the sale “comes as many newspapers are struggling to survive. Print newspaper ad revenues fell 55% between 2007 and 2012, according to the Newspaper Association of America, as advertisers and readers have defected to the Web.”