In Outsmart!, consultant and best-selling author Jim Champy profiles nine high-growth companies that are leveraging the global IT infrastructure and new business models to redefine existing markets and create new ones. Gil Press and Chris Kane spoke with Champy in his office in Boston. 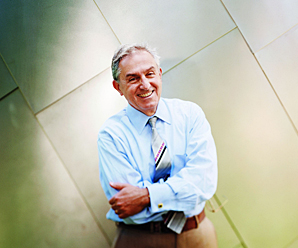 Gil Press: What’s the central theme of the book?

Jim Champy: The underlying idea is that there really isn’t a lot new in management, but there’s a lot new in business. What Peter Drucker wrote in the mid-1950s is still valid, still the basic principle by which we run companies and should run companies. However, because of the rise of the global IT infrastructure, there are many companies that are achieving success by operating in fundamentally different ways. When you look today at companies that outsmart their competitors, it’s a lot about how they’re executing. The classical strategist doesn’t believe that how you do work can be a competitive advantage. Their assumption is someone can easily copy that. I’ve never believed that.

Gil: Can you put the book in the context of your previous work, especially Reengineering the Corporation?

Jim: When I look back now, I see that my prior work was preparatory. Reengineering is still valid and important, but it’s not enough. Businesses need to adopt fundamentally different business models, encompassing not only what you deliver to customers but also how it’s delivered. We see today an active redefinition of what’s being sold and how.

Jim: Absolutely. Sonicbids is a Web-based company that matches musicians with promoters who need to hire talent for events like weddings and reunions. The individual transactions are small-which means large agencies wouldn’t handle them because they couldn’t make any money at it. But cumulatively, it’s a $13 billion market. Sonicbids figured out how to use technology to serve that fragmented market. It’s a whole new business model. But what they’re doing today, you couldn’t have done efficiently even five or 10 years ago. When we wrote the reengineering book, there was no free information technology infrastructure.

Gil: What is different about today’s IT infrastructure?

Jim: Today’s infrastructure allows money, information, products, and services to all moves in fundamentally different ways. It means that all markets are global, no matter how big or small you are. That’s a huge move.

The new IT infrastructure also allows smart companies to evolve quickly. One young guy told me, “The Internet is a 20-year-old’s best friend.” That’s because you can put out a product or service and almost immediately determine whether or not it’s working. You can learn from your mistakes much faster than people in business have ever learned. And a 20-year-old knows as much about the Internet and how to use it as a 50-year-old-maybe more.

Chris: A number of the companies have built their businesses around gaps and dysfunctions in an industry.

Jim: One of the common traits in the leaders we talked to is their ability to see an opportunity where no one else does. Sometimes you’re so deep in an industry, you don’t see the dysfunction. Healthcare is a good example. It took an entrepreneur to create MinuteClinic, which is based on a retail model that many clinicians would find problematic. MinuteClinic provides a set of basic health services seven days a week at low cost in kiosks located in retail stores. It’s a very convenient and cost-effective way for people to get treated for common ailments like sinus infections and allergies. But the company faced a lot of resistance from the medical establishment.

Gil: When you wrote the reengineering book, the corporation was very clearly defined. Now, with the help of the Internet, there is no clear boundary between a company and its partners. What are the ingredients needed for successful partnerships?

Jim: Transparency, trustworthiness, and standardization are crucial. Whenever you see contention between partners, it’s typically because one of those elements is missing. All these companies are very transparent, very open. Nobody once said to me they had a secret that they wouldn’t disclose.

Gil: In quite a few cases, companies were able to marshal their partners to standardize around a common way of doing business.

Jim: Yes. Partsearch is a good example. They provide an online catalog that lets consumers and repair people search and order eight million parts for more than 560 brands of major appliances and consumer electronics. One of the keys to their success is that they were able to convince all these different manufacturers who had labeled their parts in different ways to switch to a single data format.

By the way, after I did that case, I started seeing the need every day. The same with Shutterfly. I was struck by how many of the Christmas cards I got this year were Shutterfly cards. Their CEO expanded what had been a traditional photo processing company into an Internet-based “social expressions” and personal publishing service. Coincidentally, for our 29th anniversary, my son gave my wife and me a book of pictures from our honeymoon that he created using Shutterfly. It cost him something like $15 to create, but it was a wonderful gift.

Chris: You talk about Shutterfly’s success at integrating commerce and community.

Jim: Yes. I think companies that just build on community without providing any other product or service are problematic from a business perspective. In my view, community should be about how you move a real product or service. It’s a whole new dynamic that the infrastructure allows.

For my next book, I interviewed the CEO of a company that makes a very unique product based on a traditional cooking technology. You won’t see advertisements for it, but really serious chefs know this product, largely through word of mouth. On the company’s website, 400 or 500 people are exchanging information daily about how to cook on this thing, which is helping popularize and globalize the cooking technique as well as the product itself.

Gil: Outsmart is not prescriptive in the way many management books are. I find that refreshing.

Jim: Every time I’ve written a book and tried to be prescriptive at a general level, I never felt that it was authentic because I would say, “But this doesn’t apply to everybody.” The argument breaks down.

Gil: Still, an intelligent person can learn lessons from these very detailed case studies. When I read the epilogue, where you summarized the common behaviors you saw, it was really a description of entrepreneurial behavior, as opposed to the behavior of what you call incumbent companies run by managers who are risk averse. What I like about the example of Smith & Wesson, whose CEO reignited their brand and expanded their product line, is that it shows you can create a startup-like environment even if you run a 130-year-old company.

Jim: Exactly. People ask me, “Is the book for entrepreneurs, or is it for large companies?” Well, it’s for both.

[First published in ON magazine]

I launched the Big Data conversation; writing, research, marketing services; http://whatsthebigdata.com/ & https://infostory.com/
View all posts by GilPress →
This entry was posted in Interviews. Bookmark the permalink.