Today in 1895, the first public screening of films at which admission was charged was held 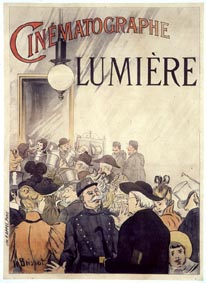 by the Lumiere brothers at the Salon Indien du Grand Café in Paris. It featured ten short films, including their first film, Sortie des Usines Lumière à Lyon (Workers Leaving the Lumière Factory). Each film was 17 meters long, which, when hand cranked through a projector, ran approximately 50 seconds. By 1900, the Lumieres had produced 1,299 short movies. For the World Fair that year, they developed their new Lumiere Wide format which, at 75 mm wide, has held the record for over 100 years as the widest film format.

I launched the Big Data conversation; writing, research, marketing services; http://whatsthebigdata.com/ & https://infostory.com/
View all posts by GilPress →
This entry was posted in Film, This day in information. Bookmark the permalink.

1 Response to This Day in Information: First Movie Screening