Earlier this evening I enjoyed 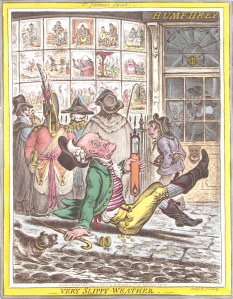 Print shops were the main channel for selling the caricatures or, for those who could not afford to buy them, renting a portfolio for an evening. Emily Brand offers this observation by a contemporary on the scene depicted in the Gillray print posted here :

“If men be fighting [across the Channel] for their possessions and their bodies against the Corsican robber [Napoleon], they are fighting here to be the first [to] see Gillray’s latest caricatures. The enthusiasm is indescribable when the next drawing appears; it is a veritable madness. You have to make your way through the crowd with your fists.”

By the 1830s, technological advances facilitated the emergence of magazines dedicated to comic art (or “cartoons,” a word sense popularized by Punch, a magazine first published in 1841), replacing the print shop as the main distribution channel for this form of enlightenment and entertainment.