The “Manchester baby” finally spits out the expected answer

“A program was laboriously inserted and the start switch pressed. Immediately the spots on the display tube entered a mad dance. In early trials it was a dance of death leading to no useful result, and what was even worse, without yielding any clue as to what was wrong. But one day it stopped, and there, shining brightly in the expected place, was the expected answer. It was a moment to remember. This was in June 1948, and nothing was ever the same again.” 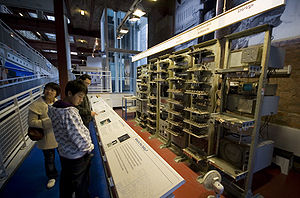 To mark the 50th anniversary of the event, a replica of the “Baby” was built by experienced engineers, many of whom made significant contributions in the early days of computing in Manchester. A simulator for the “Baby” was made available, and a competition was organized to find the most interesting new program written for it. The winner was Yasuaki Watanabe from Japan with his noodle-timer program.