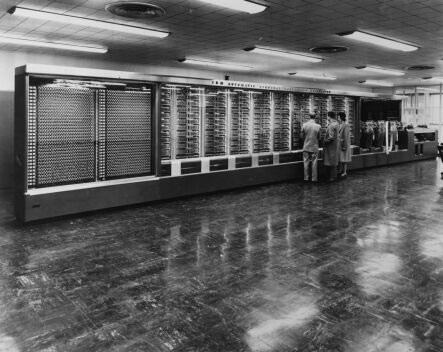 Sixty-five years ago today, the Subcommittee on Large-Scale Computing Devices (LCD) of the American Institute of Electrical Engineers (AIEE) was formed, evolving in 1963 into the IEEE.

Also today, in 1944, the IBM Automatic Sequence Controlled Calculator (ASCC)–also known as the Harvard Mark I–the largest electromechanical calculator ever built was officially presented to, and dedicated at, Harvard University.

Martin Campbell-Kelly and William Aspray in Computer:”The dedication of the Harvard Mark I captured the imagination of the public to an extraordinary extent and gave headline writers a field day. American Weekly called it ‘Harvard Robot Super-Brain’ while Popular Science Monthly declared ‘Robot Mathematician Knows All the Answers.’… The significance of this event was widely appreciated by scientific commentators and the machine also had an emotional appeal as a final vindication of Babbage’s life. In 1864 Babbage had written: ‘half a century may probably elapse before anyone without those aids which I leave behind me, will attempt so unpromising a task.’ Even Babbage had underestimated how long it would take…. [The ASCC] was perhaps only ten times faster than he had planned for the Analytical Engine. Babbage would never have envisioned that one day electronic machines would come into the scene with speeds thousands of times faster than he had ever dreamed. This happened within two years of the Harvard Mark I being completed.”

IBM applied the lessons it learned about large calculator development in its own Selective Sequence Controlled Calculator (SSEC), a project undertaken when Howard Aiken angered IBM’s Thomas Watson Sr. at the ASCC announcement by not acknowledging IBM’s involvement and financial support (which included commissioning the industrial designer Norman Bel Geddes to give the calculator an exterior suitable to a “Giant Brain”). Thomas and Martha Belden in The Lengthening Shadow: “Few events in Watson’s life infuriated him as much as the shadow cast on his company’s achievement by that young mathematician. In time his fury cooled to resentment and desire for revenge, a desire that did IBM good because it gave him an incentive to build something better in order to capture the spotlight.”

Also today, in 1970, the first all-computer championship was held in New York and won by CHESS 3.0, a program written by Atkin and Gorlen at Northwestern University. Six programs had entered.