The Paperless Office of the Future, Still 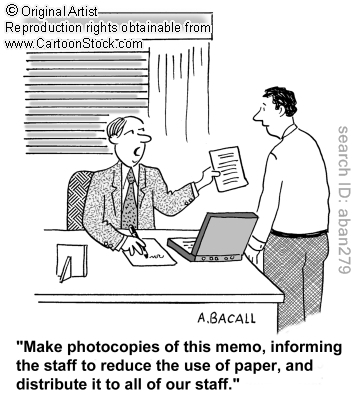 News from IDC today: “Not Dead Yet: Printed Page Volume to Reach 1.2 Trillion in the U.S. by 2015.”
From the IDC press release: “Overall, printed page volume will remain steady despite a myriad of obstacles, including the introduction of green initiatives within a growing number of enterprise organizations; more widespread managed print services engagements; changing end-user behavior patterns from young, digitally oriented workers; and a weak economy.”

“By the end of the 1970s, we should have climbed out of the Gutenberg rut. Paper— memos, letters, and other business forms—will have been replaced to a large extent by electronic communications devices.” — “Management and the Information Revolution,” Administrative Management, January 1970.

“Some believe that the paperless office is not that far off. Vincent E. Giuliano of Arthur D. Little, Inc., figures that the use of paper in business for records and correspondence should be declining by 1980, “and by 1990, most record-handling will be electronic.” — BusinessWeek, “The Office of the Future,” June 30, 1975

“Like other visions of starkly modern technological futures, the ‘office of the future’ promoted during the late 1970s has been realized in a slower, messier, and less complete manner than once expected. Rather than the sudden shift to the paperless automated office of the future, the result was a hybrid of old and new technologies in which documents were prepared using personal computers but usually disseminated on paper. … As the new ease of printing sent office paper to new record levels, a joke arose that the paperless office would arrive at around the same time as the paperless toilet.” — Thomas Haigh, “Remembering the Office of the Future,” IEEE Annals of the History of Computing, October-December 2006.

“This is one of the great puzzles of the modern workplace. Computer technology was supposed to replace paper. But that hasn’t happened. Every country in the Western world uses more paper today, on a per-capita basis, than it did ten years ago. The consumption of uncoated free-sheet paper, for instance—the most common kind of office paper—rose almost fifteen per cent in the United States between 1995 and 2000.” — Malcolm Gladwell, “The Social Life of Paper,” The New Yorker, March 25, 2002

“The paperless office is a myth not because people fail to achieve their goals, but because they know too well that their goals cannot be achieved without paper. This held true over thirty years ago when the idea of the paperless office first gained some prominence, and it holds true today at the start of the twenty-first century.”–Abigail Sellen and Richard Harper, The Myth of the Paperless Office, 2002

“What actually happened was that global consumption of office paper more than doubled in the last two decades of the 20th century, as digital technology made printing cheaper and easier than ever before… Yet the prediction seems to be coming true at last. American office workers’ use of paper has actually been in decline since 2001. What changed? The explanation seems to be sociological rather than technological. A new generation of workers, who have grown up with e-mail, word processing and the internet, feel less of a need to print documents out than their older colleagues did. Offices are still far from paperless, but the trend is clear.” — “Not dead, just resting,” The Economist, October 9, 2008