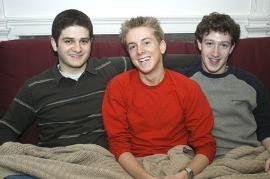 Today in 2004, Harvard Sophomore Mark Zuckerberg launched “Thefacebook” from his dorm room. Membership was initially restricted to students of Harvard College, and within the first month, more than half the undergraduate population at Harvard was registered on the service. The restrictions, according to David Kirkpatrick in The Facebook Effect, “made Thefacebook exclusive, but it also ensured that users were who they said they were…. Validating people’s identity made Thefacebook fundamentally different from just about everything else that had come before on the Internet, including Friendster and MySpace.”

On February 1, 2012, Facebook filed for an IPO. From Mark Zuckerberg’s letter in the IPO filing: “…we hope to rewire the way people spread and consume information. We think the world’s information infrastructure should resemble the social graph — a network built from the bottom up or peer-to-peer, rather than the monolithic, top-down structure that has existed to date. We also believe that giving people control over what they share is a fundamental principle of this rewiring.”

I launched the Big Data conversation; writing, research, marketing services; http://whatsthebigdata.com/ & https://infostory.com/
View all posts by GilPress →
This entry was posted in Facebook, This day in information. Bookmark the permalink.