Librarians Against the Machine 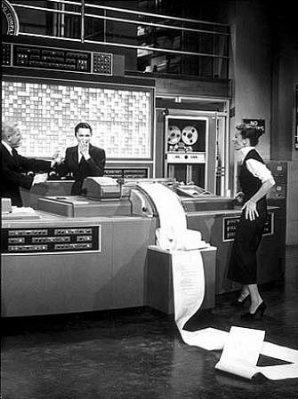 “They can’t build a machine to do our job; there are too many cross-references in this place”—The head librarian (Katharine Hepburn) to her anxious colleagues in the research department when a “methods engineer” (Spencer Tracy) is hired to “improve workman-hour relationship” in a large corporation; by the end of the film, Desk Set (released in 1957), she proves her point by winning, not only the engineer’s heart, but also a contest with the ominous looking “Electronic Brain” (aka Computer).

“American libraries operate in a societal environment where there is almost morbid fascination with the latest form of technology. At one extreme is its recreational manifestation – witness the phenomena of the hula-hoop and the yo-yo. At the other is industry, where the very most recent gadget is swiftly adopted by ‘progressive’ management, not infrequently before any evidence has been accumulated about the relative effectiveness, utility, or applicability of such equipment to the specific requirements of the organization”–Paul Wasserman, The Library and the Machine, 1965

I launched the Big Data conversation; writing, research, marketing services; http://whatsthebigdata.com/ & https://infostory.com/
View all posts by GilPress →
This entry was posted in Libraries, Quotes, Race Against the Machine. Bookmark the permalink.

1 Response to Librarians Against the Machine