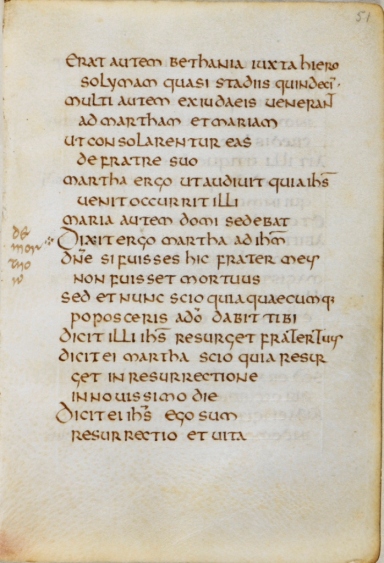 A page from the St Cuthbert Gospel relating part of the story of Lazarus, with a contemporary marginal note reading "de mortuorum", marking out a page to be read at masses for the dead (London, British Library, MS Additional 89000, f. 51r).

The British Library has announced that it has successfully acquired the St Cuthbert Gospel, a miraculously well-preserved 7th century manuscript that is the oldest European book to survive fully intact and therefore one of the world’s most important books.  The £9 million purchase price for the Gospel has been secured following the largest and most successful fundraising campaign in the British Library’s history. The manuscript has recently been fully digitized.  The manuscript, which is a copy of the Gospel of St John, was created in the late 7th century in the north-east of England and placed in St Cuthbert’s coffin, apparently in 698. It was discovered when the coffin was opened in Durham Cathedral in 1104 on the occasion of the removal of Cuthbert’s body to a new shrine.