From the Archives: “What Has God Wrought?”–A Love Story 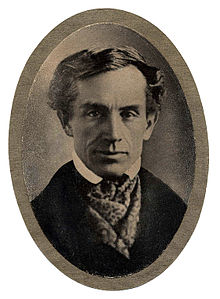 Today in 1844, Samuel Morse sent the the message “What Has God Wrought” to officially open the first telegraph line, between Washington, D.C. and Baltimore, launching an industry and ending a rocky journey that began with the 1837 resolution by the U.S. House of Representatives requesting the Treasury Secretary to recommend how “a system of telegraphs for the United States” should be established.

Wikipedia–and many other sources–report that “Annie Ellsworth chose these words from the Bible (Numbers 23:23); her father,  Henry Leavitt Ellsworth, [the first commissioner of the U.S. patent office (1835-1845)] had championed Morse’s invention and secured early funding for it.”

Richard John, however, notes in Network Nation that while “the Anne Ellsworth story has become firmly enshrined in American folklore,” certain details “do not add up.” Most puzzling was “Morse insistence that Anne herself has chosen the text. Morse’s authorized biographer assigned the honor to Anne’s mother, Nancy [who was known for her intense religiosity] and there seems to be little reason to doubt the biographer’s veracity.”

Why did Morse go to such lengths to link Anne to the opening ceremony at the Supreme Court Chamber and why did the ceremony went unnoticed in the press?

Morse, John tells us, was a “reclusive and financially strapped 53-year-old widower and father to a daughter several years older than Anne; Anne was a vivacious and eminently eligible 18-year-old girl.” Still, by 1844, “Morse had fallen deeply in love with… ‘Annie,’ as Morse called her, and, in ways that only the lovestruck can fully comprehend, was determined to press his suit.”

Which explains why, John believes, the ceremony was not promoted as a media event. Morse wanted it to be a “private celebration for himself, Anne, her parents, and a few close friends.”

Anne got the first tape, with Morse adding a question mark at the end of the biblical text (see here). “Conceivably,” says John, “he intended it as a term of endearment or even as a marriage proposal…. Anne’s parents knew that Morse was courting their daughter and they did nothing to break it off. If Morse by some miracle was to win Anne’s heart, it had presumably occurred to them that Morse’s patent rights would make a handsome dowry. Ordinarily, of course, a dowry was a gift from the bride’s father to his daughter’s betrothed; in this instance, the gift has already been bestowed.”  Anne’s father, Patent Commissioner Ellsworth, helped Morse obtain his first telegraph patent in 1840.