Yesterday’s Futures: The Limits of Our Vision 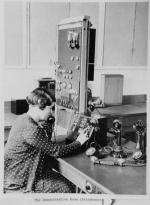 Demonstration of a telephone exchange at the Post Office Research Station

In 1969, the Post Office Research Station at Dollis Hill, U.K., produced a video titled “Telecommunications services for the 1990s.” Predictably, it extrapolates from the reality (no distortion here) of the telephone network of the 1960s. Only the transmission is digital; the rest of the future is mostly analog (e.g., digital-to-analog picture/document scanning) and device-challenged (pager instead of a mobile phone).

Twenty years later, Tim Berners-Lee invented the Word Wide Web on top of a global public network, the Internet, launched in 1969. Yet, IBM published (internally) a report in 1989 and AT&T produced a video in 1993 that, just like the 1969 Post Office video envisioned great “information services” delivered by a powerful global multimedia private telephone/computer network.

To quote myself: “Many predictions are what the forecasters want the future to be or simply an extension of what they are familiar and comfortable with.”