Life without the Internet in 1,115 Words

Paul Miller reports on the first three months being paid to completely disconnect from the Internet:

The first two weeks were a zen-like blur. I’ve never felt so calm and happy in my life. Never. And then I started actually getting stuff done. I bought copies of Homer, Plato, Aristotle, Herodotus, and Aeschylus. I was writing at an amazing pace. For the first time ever I seemed to be outpacing my editors.

Without the internet, everything seemed new to me. Every untweeted observation of daily life was more sacred. Every conversation was face to face or a phone call, and filled with a hundred fresh nuances. The air smelled better. My sentences seemed less convoluted. I lost a bit of weight.

Three months later, I don’t miss the internet at all. It doesn’t factor into my daily life. I don’t say to myself, “ugh, I wish I could just use the internet to do that.” It’s more like it doesn’t exist for me. I still say “ugh, I have to do that” — it’s just not the internet’s fault…

…I have zero regrets about leaving the internet. I’m only three months in, and I can honestly say that this is turning into the best year of my life. I’m vaguely famous, I’ve lost 10 pounds, and I’ve read a few classic books I’ve always wanted to spend time with. I think I’m on track to figure some stuff out about how to live in a modern society without being purely shaped by it. Not everything, but maybe just a little bit.

Miller told CNN that he loves the Internet. Most people experimenting with disconnecting from electronic media don’t. Prime example is Bill McKibben who in 1992–just before the blossoming of the World Wide Web (which has brought the “Internet” into our lives)–spent a day (yes, a day!) without television and lived to write about it in The Age of Missing Information. 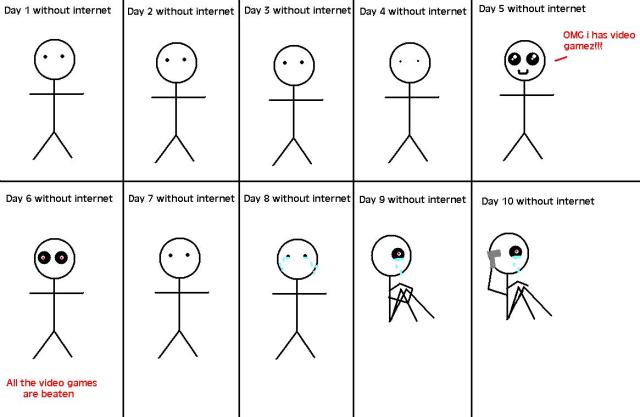