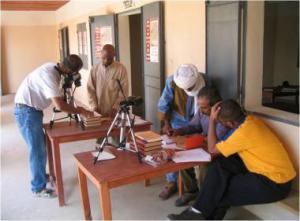 Sarah Laskow in The Boston Globe:

Though today Timbuktu is a remote and dusty city of 54,000 at the edge of the Sahara, 500 years ago it was a major commercial crossroads and a great center for scholarship. Copied onto [the disks that were smuggled out of Timbuktu] were scanned versions of some of the world’s most important surviving medieval manuscripts, texts on Islam, politics, math, and science that illuminate the city’s past as a center of learning. In the last decade, Timbuktu’s libraries have been working with partners in the United States, South Africa, and France to create digital archives of its crumbling documents. Expensive scanners and digital cameras have been ferried up the slow Niger River or along the long road to the isolated city to capture these texts electronically and in some cases to post them online, making them widely available to scholars for the first time.