Age of Internet Empires: Google and Facebook Vie for Dominance 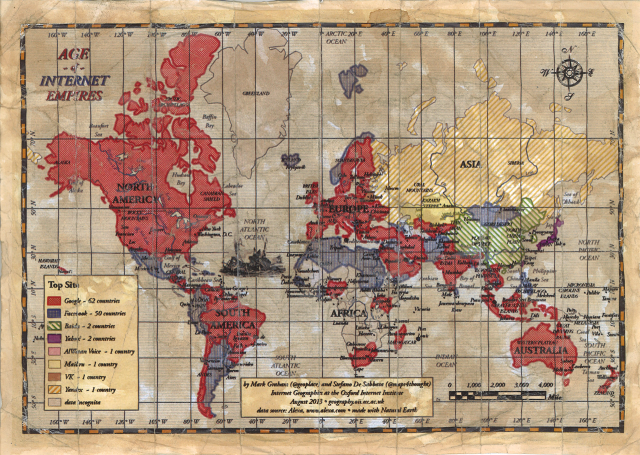 The Oxford Internet Institute published recently a map illustrating the most visited website in each country. It concluded:

The situation is more complex in Asia, as local competitors have been able to resist the two large American empires. Baidu is well known as the most used search engine in China, which is currently home to the world’s largest Internet population at over half a billion users. At the same time, we see a puzzling fact that Baidu is also listed as the most visited website in South Korea (ahead of the popular South Korean search engine, Naver). We speculate that the raw data that we are using here are skewed. However, we may also be seeing the Baidu empire in the process of expanding beyond its traditional home territory.

We are likely still in the very beginning of the Age of Internet Empires. But, it may well be that the territories carved out now will have important implications for which companies end up controlling how we communicate and access information for many years to come.