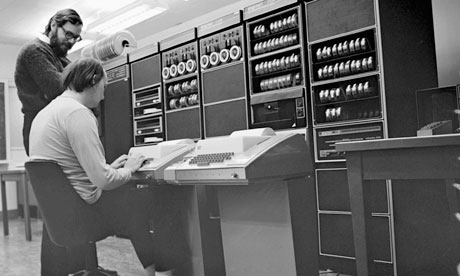 40 years ago today (October 15, 1973), Dennis Ritchie and Ken Thompson presented their first paper on Unix at the fourth ACM Symposium on Operating Systems Principles (SOSP) held at Purdue University. The paper will later be published in the July 1974 issue of Communications of the ACM (here is the revised 1978 version). Dennis Ritchie passed away on October 12, 2011. John Naughton in The Guardian: “It’s funny how fickle fame can be. One week Steve Jobs dies and his death tops the news agendas in dozens of countries. Just over a week later, Dennis Ritchie dies and nobody – except for a few geeks – notices. And yet his work touched the lives of far more people than anything Steve Jobs ever did. In fact if you’re reading this online then the chances are that the router which connects you to the internet is running a descendant of the software that Ritchie and his colleague Ken Thompson created in 1969… what Apple really did was to give Unix a pretty face. I’ve often wondered what Dennis Ritchie would have made of that. Now that he’s gone, we’ll never know. What we do know, though, is that we owe him more than we realised.”