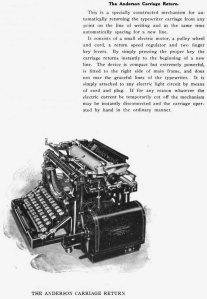 Today in 1906, the New York Times reports that “Youth says he solved a typewriter problem” by inventing the automatic carriage return. “Springs cause the carriage to slide back to starting point when end of a line Is reached,” said the New York Times about the solution of the 18-year-old Robert Eugene Turner to “a problem that has puzzled manufacturers of typewriters for years” as “it was recognized long ago, experts assert, that an automatic carriage return would add from 25 to 30 percent  to the speed of the operation.”

Robert Messenger, in the World of Typewriters 1714-2014, says that “the automatic carriage return was invented by Neal Larkin Anderson, a Presbyterian minister and doctor of divinity of Salem-Winston, North Carolina, who was issued with a series of six unassigned patents on the device over 20 years between 1897-1917.”

See also The Rise and Fall of Typewriters

I launched the Big Data conversation; writing, research, marketing services; http://whatsthebigdata.com/ & https://infostory.com/
View all posts by GilPress →
This entry was posted in Automation, This day in information, Writing. Bookmark the permalink.