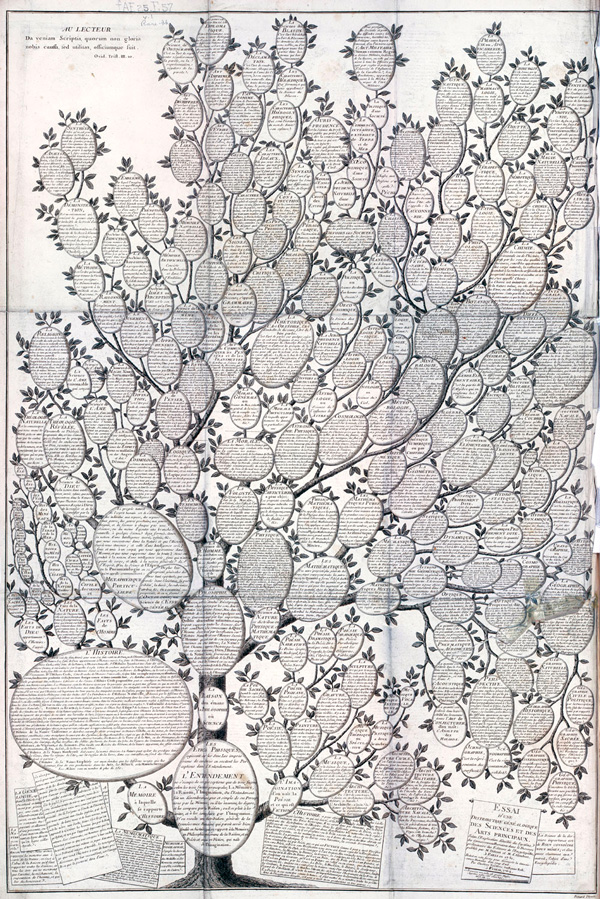 A remarkable tree featured as a foldout frontispiece in a later 1780 edition of the French Encyclopédie by Denis Diderot and Jean le Rond d’Alembert, first published in 1751. The book was a bastion of the French Enlightenment and one of the largest encyclopedias produced at that time. This tree depicts the genealogical structure of knowledge, with its three prominent branches following the classification set forth by Francis Bacon in ‘The Advancement of Learning’ in 1605: memory and history (left), reason and philosophy (center), and imagination and poetry (right). The tree bears fruit in the form of roundels of varying sizes, representing the domains of science known to man and featured in the encyclopedia.

Source: Brain Pickings from  The Book of Trees: Visualizing Branches of Knowledge 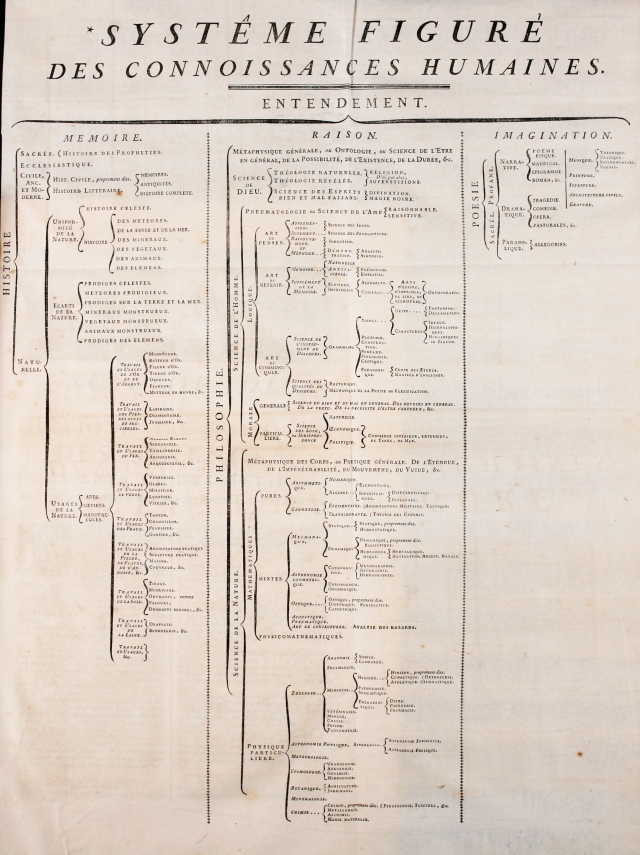 The “figurative system of human knowledge”, sometimes known as the tree of Diderot and d’Alembert, was a tree developed to represent the structure of knowledge itself, produced for the Encyclopédie by Jean le Rond d’Alembert and Denis Diderot.

The tree was a taxonomy of human knowledge, inspired by Francis Bacon‘s The Advancement of Learning. The three main branches of knowledge in the tree are: “Memory”/History, “Reason”/Philosophy, and “Imagination”/Poetry.

Notable is the fact that theology is ordered under ‘Philosophy’. The historian Robert Darnton has argued that this categorization of religion as being subject to human reason, and not a source of knowledge in and of itself (revelation), was a significant factor in the controversy surrounding the work. Additionally notice that ‘Knowledge of God’ is only a few nodes away from ‘Divination’ and ‘Black Magic’.

The original version, in French, can be seen in the graphic on the right. An image of the diagram with English translations superimposed over the French text is available.