Race Against the Machine 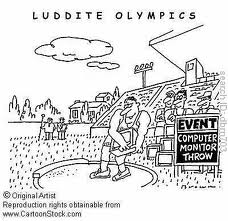 “At least since the followers of Ned Ludd smashed mechanized looms in 1811, workers have worried about automation destroying jobs. Economists have reassured them that new jobs would be created even as old ones were eliminated. For over 200 years, the economists were right. Despite massive automation of millions of jobs, more Americans had jobs at the end of each decade up through the end of the 20th century. However, this empirical fact conceals a dirty secret. There is no economic law that says that everyone, or even most people, automatically benefit from technological progress.”- Erik Brynjolfsson and Andrew McAfee, “Why Workers Are Losing the War Against Machines,” Atlantic Monthly, October 26, 2011

“Recently there have been a good deal of news about strange giant machines that can handle information with vast speed and skill…. These machines are similar to what a brain would be if it were made of hardware and wire instead of flesh and nerves… A machine can handle information; it can calculate, conclude, and choose; it can perform reasonable operations with information. A machine, therefore, can think” – Edmund Berkeley, Giant Brains: Or Machines that Think, 1949

“They can’t build a machine to do our job; there are too many cross-references in this place” — The head librarian (Katharine Hepburn) to her anxious colleagues in the research department when a “methods engineer” (Spencer Tracy) is hired to “improve workman-hour relationship” in a large corporation; by the end of the film, Desk Set (released in 1957), she proves her point by winning, not only the engineer’s heart, but also a contest with the ominous looking “Electronic Brain” (aka Computer).

“American libraries operate in a societal environment where there is almost morbid fascination with the latest form of technology. At one extreme is its recreational manifestation – witness the phenomena of the hula-hoop and the yo-yo. At the other is industry, where the very most recent gadget is swiftly adopted by ‘progressive’ management, not infrequently before any evidence has been accumulated about the relative effectiveness, utility, or applicability of such equipment to the specific requirements of the organization” – Paul Wasserman, The Library and the Machine, 1965

“Fear of enslavement by our creations is an old fear, and a literary truism. But I fear something worse and much more likely—that some time after 2020, our machines will become intelligent, evolve rapidly, and end up treating us as pets. We can at least take comfort that there is one worse fate—becoming food—that mercifully is highly unlikely.” —Paul Saffo, September 2006

“If you draw the timelines, realistically by 2050 we would expect to be able to download your mind into a machine, so when you die it’s not a major career problem.”—Ian Pearson, 2005