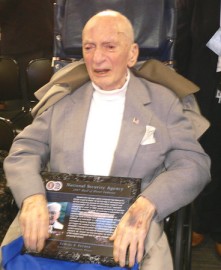 96-year-old Samuel Snyder inducted into the NSA Hall of Honor, 2007

Today in 1950, Samuel S. Snyder, a cryptographer at the Armed Forces Security Agency (AFSA–the forerunner to the NSA), met with Dr. A. Sinkov, then Technical Director in Communications Security (COMSEC), and his deputy. In a 1973 declassified paper (PDF, released in 2007), Snyder recalled the purpose of the meeting: “They described an emergency requirement in COMSEC for production and checking of several hundred ‘involutory matrices.'”

Jack Levine and H. M. Nahikian in The American Mathematical Monthly, April 1962: “The construction of involutory matrices has a practical application in algebraic cryptography. The use of involutory matrices X=X-1  has the cryptographic advantage that, for example, the same cipher machine can be used for enciphering and deciphering. Such a machine has, in fact, been patented by Weisner and Hill (U.S Patent 1,845,947)” in 1929.

In the declassified paper, titled “Earliest Applications of the Computer at NSA,” Snyder wrote: “NSA’s earliest successful application of electronic computers began in July 1950, before we had any computer. At that time, the only electronic computer in operations in this country was SEAC [Standards Eastern Automatic Computer], recently completed at the National Bureau of Standards… Our experience in using SEAC seems, in retrospect, to have been a combination of frustration, exhilarating sense of accomplishment, and participation in making history.” Although allowed to use SEAC only at the midnight shift or Sunday afternoons (the rest if the time was “monopolized” by NBS engineers and programmers) and despite the challenges related to the “misbehaving” SEAC memory, Snyder and his colleagues printed out and delivered to Dr. Sinkov 900 matrices after five or six visits to the SEAC.

Synder published the History of NSA General-Purpose Electronic Digital Computers in 1964. He was inducted into the NSA Hall of Honor in 2007, shortly before he passed away, aged 96.

I launched the Big Data conversation; writing, research, marketing services; http://whatsthebigdata.com/ & https://infostory.com/
View all posts by GilPress →
This entry was posted in Computer history, NSA, This day in information. Bookmark the permalink.