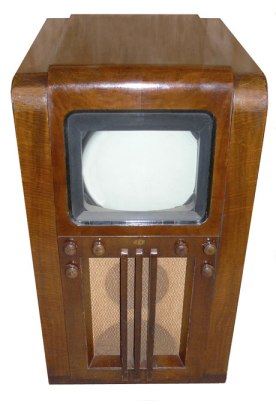 Today in 1938, musical performances in an upstairs area at 568 Commonwealth Avenue, Boston, were screened on a television display in the auditorium below, seating 200 patrons paying 25 cents each. The studio and auditorium were linked by cable. About two weeks later, Time magazine reported:

Holding no television broadcasting license. Educator-Entrepreneur Evans carries his pictures from M. I. T.’s second-story studio to its street-level showroom by wire. Amateur talent on the first show included Boston’s Mayor Maurice Joseph Tobin. Professional performers will be hired only if the box office take is large enough to pay salaries. President Evans does not expect his theatre to survive Boston’s first curiosity to see television pictures. Said he: “I’ve always practiced the reduction of ideas to practice.”

Note that after the first mention of “M.T.I.” (for Massachusetts Television Institute), the text refers a number of times to “M.I.T.” Challenges of digitization?

I launched the Big Data conversation; writing, research, marketing services; http://whatsthebigdata.com/ & https://infostory.com/
View all posts by GilPress →
This entry was posted in Television, This day in information. Bookmark the permalink.