Robotics and the Birth of Silicon Valley 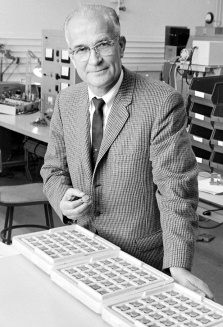 “The life of William Shockley—Nobel Prize winner, inventor of the junction transistor, and founder of the seminal silicon electronics laboratory—has been well chronicled. But recently, while digging through the Shockley archives at Stanford University, researcher David C. Brock made a shocking discovery: As early as 1951, Shockley had his heart and his tremendous technical acumen set on creating a robotic workforce. According to Brock, it was Shockley’s unyielding but ultimately unsuccessful push to field an automaton army that set the stage for the Silicon Valley we know today. The “men of imagination and initiative” that he brought together—including Moore, Noyce, Hoerni, Kleiner, and Last—soon took silicon electronics in new directions, spurring the creation of countless new tech companies that produced a dizzying number of advances.”