Steve Jobs Back at Apple as iCEO 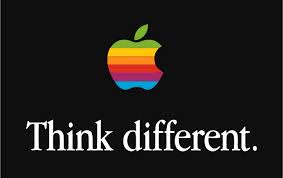 Logo for the Think Different campaign designed by TBWA\Chiat\Day and initiated by Jobs after his return to Apple Computer in 1997.

Today in 1997, Steve Jobs announced that he would take over running Apple Computer as interim CEO, a title that invariably got abbreviated as iCEO. That was almost 12 years to the day (September 17, 1985) when he resigned from Apple. “For the fiscal year that ended when Jobs became interim CEO in September 1997,” writes Walter Isaacson in Steve Jobs, “Apple lost $1.04 billion. ‘We were less than  thirty days from being insolvent,’ he recalled… For the full fiscal year of 1998, it would turn in a $309 million profit. Jobs was back, and so was Apple.”

I launched the Big Data conversation; writing, research, marketing services; http://whatsthebigdata.com/ & https://infostory.com/
View all posts by GilPress →
This entry was posted in Apple, Computer history, This day in information. Bookmark the permalink.