This Week In Tech History: Back To The Future

Here he comes big with Statistics, Troubled and sharp about fac’s. He has heaps of the Form that is thinkable—The stuff that is feeling he lacks.—Robert Louis Stevenson

Our modern reliance on numbers and quantification was born and nurtured in the scientific and commercial worlds of the seventeenth century… Numerical facts trounced opinions and were supposed to foster community consensus, because all thinking people would naturally agree if they possessed total and accurate information—Patricia Cline Cohen, A Calculating People, 1999

In an increasingly complex world full of senseless coincidence, what’s required in many situations is not more facts – we’re inundated already – but a better command of known facts, and for this a course in probability is invaluable—John Allen Paulos, Innumeracy, 1988

I keep saying that the sexy job in the next 10 years will be statisticians. And I’m not kidding—Hal Varian, 2009

“Is the world a better place today?” (isWBPT) is a web-based, interactive visualisation app based on the Millenium Develoment Goals data.

Dr. Emmett “Doc” Brown arrives in the future in his DeLorean time machine, bringing Marty McFly and his girlfriend, Jennifer Parker, to help their future children by being transported from October 26, 1985.

The transcontinental telegraph, the first instant communications link between the Atlantic and Pacific coasts, is completed. The first message is sent to President Abraham Lincoln from Horace W. Carpentier, president of the Overland Telegraph Co.: “I announce to you that the telegraph to California has this day been completed. May it be a bond of perpetuity between the states of the Atlantic and those of the Pacific.”

Instant communications made the Pony Express obsolete, and it officially ceased operations two days later. For its 18 months of operation, the Pony Express reduced the time for messages to travel between the Atlantic and Pacific coasts to about ten days.

Life without instant communication (and before travel by railway), is described well by Stephen Ambrose in Undaunted Courage:

A critical fact in the world of 1801 was that nothing moved faster than the speed of a horse. No human being, no manufactured item, no bushel of wheat … no letter, no information, no idea, order, or instruction of any kind moved faster. Nothing ever had moved any faster, and, as far as contemporaries were able to tell, nothing ever would. 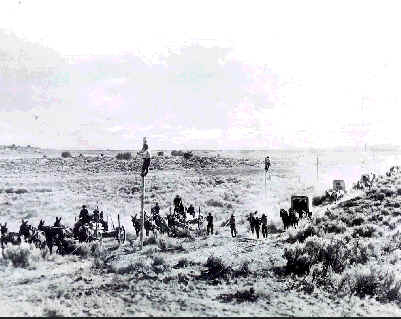 I launched the Big Data conversation; writing, research, marketing services; http://whatsthebigdata.com/ & https://infostory.com/
View all posts by GilPress →
This entry was posted in Statistics, Telegraph and tagged Apple, back to the future, iPod, visicalc. Bookmark the permalink.